The Mechanisms and Concepts Behind Transcranial Focused Ultrasound (tFUS): An Overview

tFUS is enabled by creating an acoustic wave by creating changes in pressure by applying electric current through crystals within an ultrasound transducer. The geometry of the transducer and the frequency of the acoustic wave are critical determinants of how neuromodulation can take place using tFUS. In terms of mechanisms, tFUS appears to modulate voltage-sensitive calcium and sodium ion channels and appears to be an all-or-nothing phenomenon. The mechanism of action can be a direct effect on neural circuits, despite early evidence of an indirect auditory mechanism in particular domains. 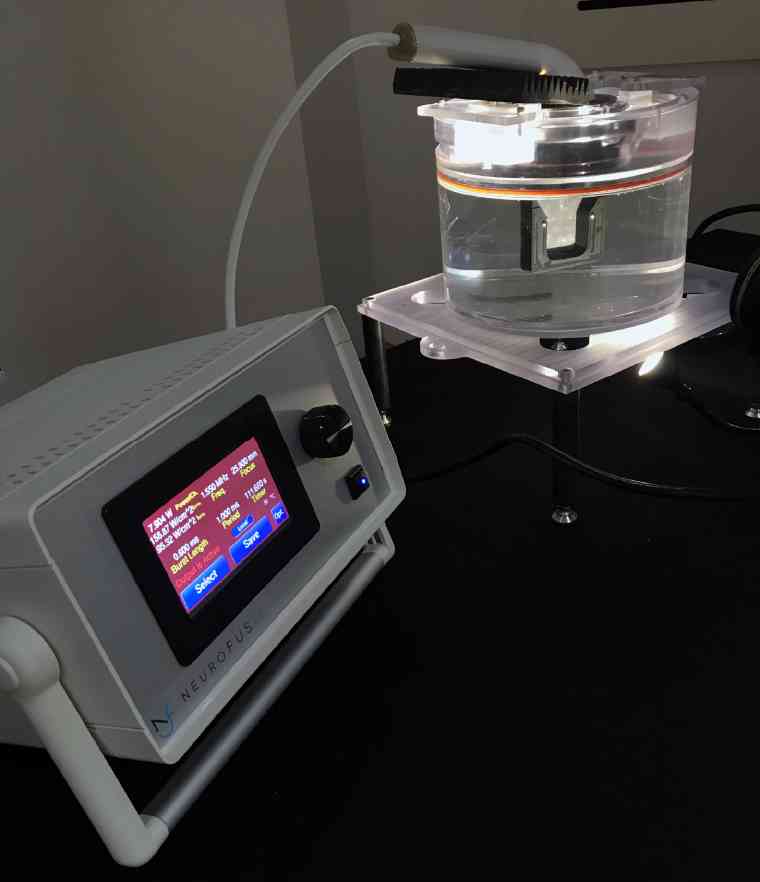 The application of transcranial focused ultrasound (tFUS) involves creating an acoustic wave (via changes in pressure) that has a frequency greater than what can be perceived by the human ear, which is more than 20 kHz. The creation of a pressure wave usually relies on a mechanism called the piezoelectric effect. The piezoelectric effect refers to the process where electricity is converted into pressure. When an electric current is applied to crystals inside an ultrasound transducer, these crystals expand or contract depending on the direction the electric current is travelling in. A vibration is occurring when these crystals start to expand or contract; whilst this vibration is taking place, acoustic energy is being released. It is this release of acoustic energy that is the basis for the ultrasonic wave which is used to affect neural circuitry during transcranial focused ultrasound (Tyler et al., 2018)1.

Figure 1. Modelling ultrasound wave propagation on an individual MRI to focus the ultrasound sonic wave on the VPL of the thalamus from Legon et al. (2018).

A principal structure that attenuates an ultrasonic wave is the skull, which leads to a loss of approximately 2.7dB/cm between the transducer and the the acoustic focus, mostly due to refraction and scattering in the skull. There is also potential for heating of the skull during tFUS, which necessitates modelling of the ultrasonic wave prior to human application. Currently, FDA guidelines suggest that the passage of the ultrasonic wave through the cranium must be modelled prior to application enabling cranial bone density to be taken into account prior to human stimulation (Pasquinelli et al., 2019). Cranial bone density currently presents a challenge to human tFUS research – less dense cranial bone will scatter, absorb or refract the ultrasonic wave to a lesser extent than denser cranial bone. The implication of individual differences in bone density means that conservative ultrasonic waveforms are administered, reducing the risk of overstimulating those with lower bone density (Pasquinelli et al., 2019). However, a consequence of this conservative criteria is that those with a higher bone density are more likely to be understimulated by there waveforms. This design of ultrasonic wave forms that take into account individual differences in cranial bone density is an open challenge for the tFUS to successfully modulate neural circuitry without absorption. In spite of the challenge of cranial bone, there is a developing consensus that the used of low intensity pulsed tFUS is a safe method of achieving neuromodulation. In particular, experiments that applied 70 – 100 sonifications at 1 – 30 W/cm^2 using 7 – 12 second inter-stimulus intervals (ISIs) in humans and animals have not revealed any evidence of damage so far (Tyler, 2019).

So far, the mechanisms determining the acoustic focus of tFUS have been discussed. However, the mechanism by which the ultrasonic wave affects neural circuitry by altering voltage-dependent processes has not been discussed. Initial reports that applying pulsed, low intensity bursts of ultrasound instead of continuous waves to hippocampal brain slices stimulated action potentials, an effect which was partially mediated voltage-gated sodium and calcium channels (Tyler et al., 2008) but the exact mechanism remains elusive. Effects on brain tissue have been observed in the absence of increases in brain temperature, suggesting that the effects of tFUS are mediated by non-thermal mechanisms (Tufail et al., 2010). Effects on electromyography (EMG) responses were observed at frequencies up to 2.9 MHz (Ye et al., 2016). It is also worth noting that similar EMG responses have not been observed in humans although tFUS can change motor evoked potential (MEP) amplitude when it is applied in conjunction with transcranial magnetic stimulation (TMS) (Legon et al., 2018). As the frequency of tFUS increaes, the intensity (W/cm^2) was also required to increase the likelihood of a motor response (Ye et al., 2016). The motor response to ultrasound appears to be an ‘all-or-nothing’ phenomenon, which is more likely to be observed when the intensity (in W/cm^2) or duration of tFUS increases, without changing the duration or strength of responses (King et al., 2012). As a result, it is becoming apparent that this success rate of a response as opposed to the magnitude of a response as an outcome measure to tFUS.

It is worth noting that an indirect mechanism has been proposed to account for some but not all tFUS effects. Early reports suggested that tFUS produces skull vibrations in mice that fall within the range of hearing, which can trigger EMG as a ‘startle’ response (Guo et al., 2018; Sato et al., 2018). Such responses are ablated when the cochlear pathway is removed. However, as the authors acknowledge, such effects cannot account for certain effects of tFUS in humans, such as the application of tFUS to S1 produces tactile sensations in the hand (Lee et al., 2015; Guo et al., 2018). Moreover, such effects do not refute the evidence that sonication of hippocampal slices can induce action potentials (Tyler et al., 2008) and modulate ion channels (Kubanek et al., 2016) in vivo via a mechanical or thermal mechanism (Guo et al., 2018). However, such experiments highlight the need to identify and control for the indirect consequences of applying ultrasound to the scalp on neural activity. However, recent investigations have revealed that EMG responses during in genetically deaf subjects do not differ from those who can hear when a (Mohammadjavadi et al., 2019). The administration of tFUS with a pulsed wave 500 kHz ultrasound with a smoothed envelope produced auditory brainstem responses (ABR) that did not differ from sham whereas rectangular envelopes with identical frequencies did not, suggesting that the choice of envelope can eliminate or reduce auditory response (Mohammadjavadi et al., 2019). Moreover, EMG durations were found to correlate with the duration of sonication, suggesting that sonication, not a startle response, underlies the EMG response. The latency of the EMG response during sonication were approximately 80ms, which differs from the latency of the startle reflex at approximately 10ms (Mohammadjavadi et al., 2019). It is also worth noting that ‘offline’ effects of tFUS which outlast the duration of sonication are usually measured 30 seconds after sonication begins to preclude the influence of startle responses on neural circuits (Verhagen et al., 2019).

The mechanism of action behind tFUS enables a wave to be directed towards almost any point within the cranium, enabling sites beneath the cortical surface to become targets for neuromodulation with higher spatial resolution than the magnetic fields and electric fields recruited by TMS and transcranial electric stimulation (tES), respectively. The geometry of the ultrasound transducer is a critical determinants of the focus – or depths that can be reached – via tFUS. The frequency that is chosen is also critical as it determines the spatial resolution of the waveform, in addition to scaling the influence of obstacles that may lie in the propagation path of ulrasound. In terms of EMG – to ultrasound appears to be an ‘all-or-nothing’ phenomenon but EMG responses have not yet been observed in humans although modulation of MEPs has been observed (Legon et al., 2018). There is also growing evidence that the effect of tFUS on neural circuits is a direct effect on the site of stimulation as opposed to an indirect effect of applying ultrasound to the scalp.