The Safety of Transcranial Focused Ultrasound Neuromodulation: An Overview

Despite relying on an acoustic mechanism, tFUS has a comparable incidence of adverse reactions to TMS and transcranial electric stimulation (tES), which is less than 10% (Tyler, in press). However, there are guidelines and methodological considerations that hold participant safety as an utmost priority whilst also enabling tFUS to be used in scientific research. Unlike tES and TMS, which rely on the direct application of electric current or electromagnetic induction respectively, tFUS stimulates brain tissue via an acoustic mechanism. As a result, the consequences of tFUS will differ from other non-invasive brain stimulation techniques.

This article will be split into two sections: the first section will consider the adverse reactions that have been reported so far. The second will draw attention to thermal and mechanical consequences of applying ultrasonic waveforms, how these consequences can be measured and point out tools that can be used to ensure that tFUS can safely be applied to human tissue.

Legon et al. (2018) published the results of a report of symptoms questionnaire from 64/120 participants who took part in seven tFUS experiments. In this experiment, single element tFUS transducers were used and frequencies ranging between ~250 to 650 kHz were applied. 7/64 reported mild to moderate symptoms that were ‘possibly’ or ‘probably’ related to the application of tFUS, including, muscle twitches, problems with attention, anxiety and neck pain which were reported 20 minutes after, but not after 1 week to a month after the application of tFUS.  A graph showing the number of participants who reported adverse reactions following tFUS, along with the likelihood of it being related to sonication can be found to the right. The full report can be found in Legon et al. (2018). 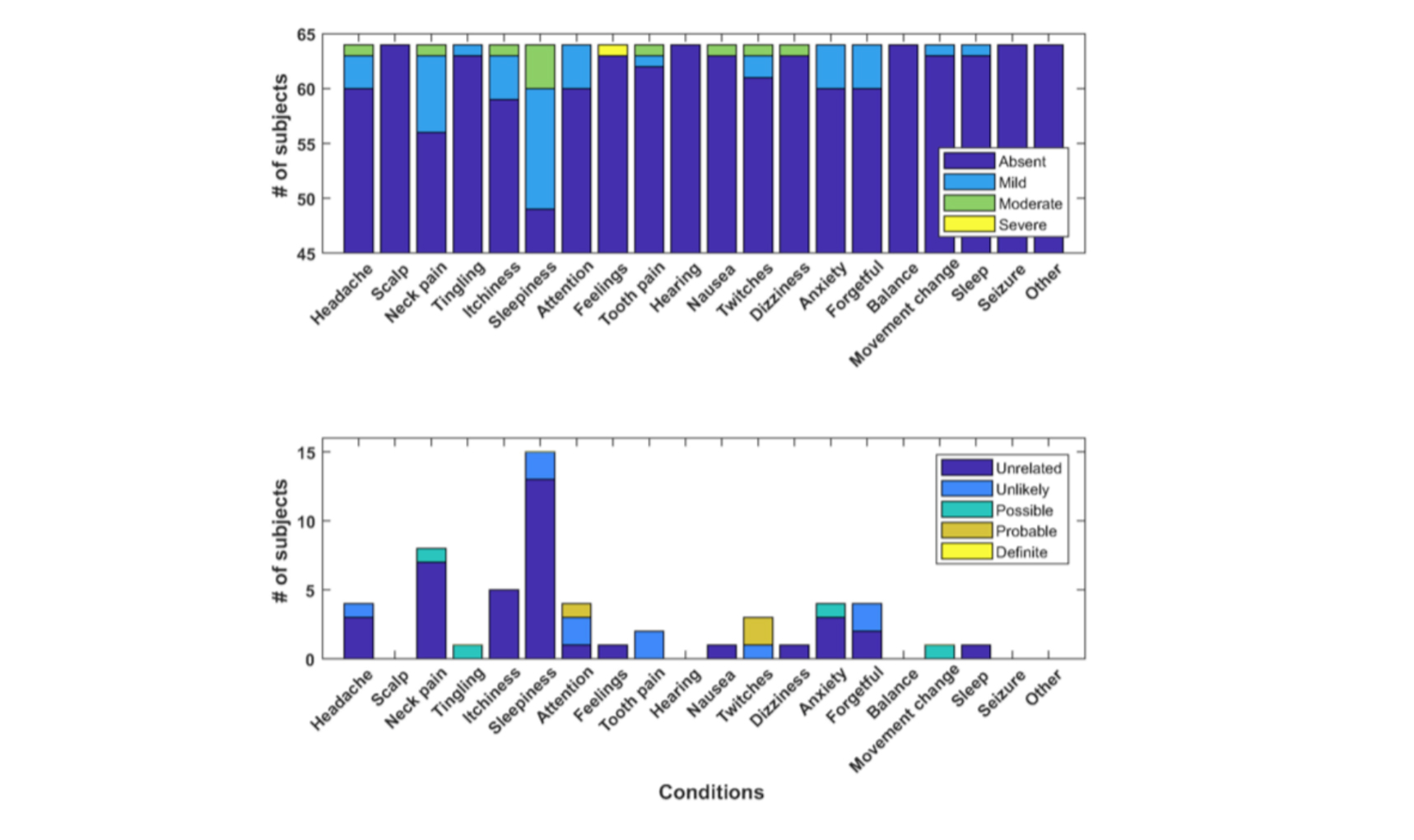 Another critical safety consideration of tFUS is understanding how it can be applied safely to avoid harmful thermal and mechanical effects. There are two major routes by which tFUS has the potential to become harmful: inertial cavitation (mechanical effect) and heating (thermal effect), which are discussed in detail in Pasquinelli et al. (2019). Inertial cavitation takes place when vapour cavities (or “bubbles”) form in soft tissue. Under certain conditions, these cavities can collapse rather than oscillate, which creates undesired force and affects neighbouring tissue. There are two measures related to inertial cavitation: 1) Isppa, which is the spatial peak pulse average, which is the average intensity calculated at the point in space of the spatial maximum, and is measured in units of Watts per cm²; and 2) the mechanical index (MI), which provides an estimate of the likelihood of inertial cavitation. In contrast, there are two different measures of heating during ultrasound: 1) the thermal index (TI) which measures temperature increases in soft tissues; and 2) the spatial peak temporal average intensity (Ispta), which refers to the average intensity of energy across time at the point in space where energy absorption from the ultrasonic beam is greatest. Ispta is measured in units of Watts per cm². Some experiments have monitored tissue temperature non-invasively during thalamic stimulation using MR thermometry and confirmed the absence of tissue damage using histological examination (Dallapiazza et al., 2017).

A review of 33 human and non-human tFUS studies in relation to safety guidelines revealed that harmful effects were absent in all but two, which used tFUS parameters that exceeded US Food and Drug Administration (FDA) guidelines in sample of animals (Pasquinelli et al., 2019). The FDA guidelines for thermal (TI, Ispta) and mechanical effects (MI, Isppa) can be found below:

A number of studies have revealed neural effects within these guidelines (Pasquinelli et al., 2019). However, there are also studies that found stable effects when one of these safety indices was exceeded, particularly an FDA guideline of an Ispta of 94mW/cm² which was introduced to avoid skull heating (Pasquinelli et al., 2019). However, as pointed out by Pasquinelli et al. (2019) the FDA standard for diagnostic US also requires protocol-specific estimations of tFUS parameters prior to human stimulation. It is also worth noting that the application of diagnostic ultrasound differs from tFUS. In tFUS, the objective is to aim the beam at one point in space where a small locus of tFUS in desirable. In contrast, diagnostic ultrasound requires the transducer to be moved around, spreading the beam throughout space (Pasquinelli et al., 2019). Thus, it is critical that the passage of the ultrasonic beam through the human cranium is modelled prior to stimulation, so these safety parameters can be estimated ahead of human stimulation. The MATLAB k-Wave toolbox is essential here, which has already successfully been used to model the propagation of the ultrasonic wave through the skull for tFUS applications (see Mueller et al., 2017, for details on estimating skull properties for tFUS).

The skull also introduces safety considerations related to heating when tFUS is applied. There is an additional FDA guideline specific to transcranial ultrasound, which is the thermal index for cranial bone (TIC), which means that the TI value of 6 also applies when bone is near the ultrasound transducer. The first consideration is that the skull can absorb a lot of energy from the ultrasonic wave, which can result in heating. The second consideration is that the skull can attenuate the ultrasonic waveform and the extent of this attenuation is determined by the bone density of the skull in the path of ultrasonic wave (Tyler et al., 2018). An implication of skull attenuation is that the same ultrasonic waveform will be absorbed by brain tissue to a greater extent in participants with lower skull bone density than those with higher bone density. The safety of the participant is the upmost priority so the consequence of attenuation due to the skull tissue is to administer conservative ultrasonic waveforms that are not likely to overstimulate those with lower bone density (Pasquinelli et al., 2019). However, this also carries the risk of understimulating those with higher bone density (Pasquinelli et al., 2019). The impact of bone density on neuromodulation is a critical issue re-affirms the necessity of modelling the passage of an ultrasonic wave through a human skull to develop safe but participant-specific dosing methods for tFUS. Ahead of further studies that provide additional constraints on what can be considered safe human tFUS, there is already evidence for protocols that have been applied without producing tissue damage.

Low intensity tFUS recruits a specific type of ultrasonic waveform, which is delivered as series of short pulsed bursts as opposed to one continuous burst. An additional constraint applied to low intensity tFUS is the temporal interval that separates one burst in the sequence from the burst preceding it, which also appears to be a critical determinant of whether a tFUS protocol is safe. The use of short pulsed bursts during low intensity tFUS is also what distinguishes it from high intensity tFUS, where the latter is used for tissue ablation (Tyler et al., 2018). Experiments that have applied 70 – 100 sonications at 1 – 30 W/cm2 using 7 – 12 second inter-stimulus intervals (ISIs) in humans and animals have not revealed any evidence of damage or adverse events so far (Tyler, in press). The only adverse event involving tissue damage in the literature so far using pulsed tFUS involved 100 highly repetitive sonications with one second between each burst, which was repeated six times, with 30 seconds in between each of the six exposures (Lee et al., 2016). The frequency was 0.25 MHz and it is worth noting that the Isppa was between 6.6 W/cm2 and 10.5 W/cm2, which was within the FDA guidelines for diagnostic ultrasound. The critical safety consideration here might not be the Isppa per se but the number of sonications underwent and the ISI separating each pulse within a sonication period. For instance, one subject underwent one sonication (instead of 6) with a higher Isppa of 13.5 W/cm2 and showed no evidence of tissue damage (Lee et al., 2016; Pasquinelli et al., 2019). However, the implication of this means that prudent guidelines need to be applied to the number of exposures to ultrasonic waveforms, including the ISI that separates one burst from the previous burst. For this reason, current recommendations for low intensity tFUS are the application of short pulses (ranging from 0.02 to 100ms) at a moderate to high repetition frequency (ranging from 10Hz – 2kHz) with a low duty cycle (< 50%), along with an Isppa that is less than 30 W/cm2 as starting point ahead of further studies clarifying the safe use of tFUS (Tyler, in press). The use of MATLAB tools to model bone density in addition to careful consideration and investigation of low intensity tFUS parameters will enable the unprecedented spatial resolution of tFUS to be utilized to safely understand neural circuitry and its implications for cognition, physiology and behaviour.

A link to the k-Wave MATLAB toolbox can be found here.