Non-invasive brain stimulation (NIBS) is used to change the state of a particular region - or target - within the human brain. In a lot of experiments, NIBS is used to establish whether a brain area is causally relevant for a cognitive and/or physiological operation. In addition to this, neuronavigation has enabled a TMS coil or tES electrode to be placed above a region of interest identified using magnetic resonance image (MRI). The choice of target is critical; if the target is not correct, the effect of stimulation protocol may be reduced or absent. Targets can be located using two broad criteria: anatomy or by function. Anatomy usually involves the position and orientation of a gyrus whereas functional targeting is a bit more complex. Recent advances in neuroimaging enable functional and anatomical magnetic resonance imaging data to be easily synthesised to choose targets for NIBS.

When transcranial magnetic stimulation (TMS) is applied, the effects of TMS are not limited to the site of stimulation (Bestmann et al., 2010). Distal, functionally-related sites are also affected by TMS pulses, which has been revealed by concurrent TMS-fMRI. In one paper, Ruff et al. (2006) applied TMS to frontal eye field (FEF) whilst participants viewed visual stimuli. The consequences of applying TMS to FEF could also be measured throughout visual cortex (V1 - V4), suggesting that TMS not only affects the site of stimulation but broader networks involved in visual processing (Ruff et al., 2006). fMRI is not only useful for identifying brain networks affected by NIBS but it is also useful at determining where to target with NIBS.

Previously, the use of functional MRI data has been incredibly useful but it can also be time consuming. Rahnev et al. (2016) identified frontal eye field (FEF) and right dorsolateral prefrontal cortex (DLPFC) using a basic perpetual judgment task. In such a task, participates had to selectively attend to left or right of the screen using a spatial cue; adjust their criteria for responding by promoting speed or accuracy; and rate their confidence. Completing the task during fMRI revealed activations in right FEF and right DLPFC for each participant. These activations were then used as targets for TMS. Applying intermittent theta burst stimulation to each of these sites revealed causal evidence for the FEF and DLPFC involvement in spatial cueing and speed/accuracy criterion setting, respectively. This is an elegant study that illustrates how neuroimaging and NIBS can be combined to precise target brain regions that are operate cognitive processes. However, it is not always feasible to devise a target to identify subject specific co-ordinates for NIBS targets.

The advent of the human connectome to characterise different brain structures enables brain networks to be distinguished using MRI (Glasser et al., 2016). Subsequently, specific nodes within a brain area (e.g. DLPFC) that engage in functional connectivity with other regions of the brain (e.g. IPS) can be identified. These enables brain stimulation experiments to beyond anatomical targeting and instead choose targets based on a network of interest. The discovery of the human connectome was made possible by combining diffusion weighted imaging (DWI), fMRI and conventional MRI with machine learning techniques to parcellate the human brain into different brain areas by utilising functional and anatomical information (Glasser et al., 2016). 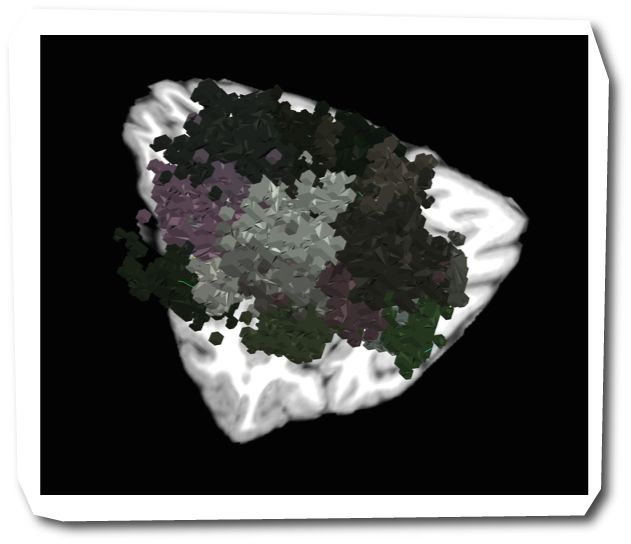 Subsequently, functional connectivity between each brain areas can be calculated to produce a correlation matrix, illustrated in figure 2. This correlation matrix can then be used to identify specific nodes within a brain area are situated within a broader brain network. Here, the correlation matrix shows specific brain regions that a correlated BOLD signal whilst at rest. Brain regions that form a network with one another can be identified by the extent to which the activity of one site temporally coincides with activity of another site - functional connectivity (Friston,  1994). Functional connectivity is measured by the extent to which positive or negative changes in BOLD signal in one site correlate with positive or negative changes in the BOLD signal within another site. If a target is desired that is within a specific network, the correlation matrix can be consulted to spot a specific node within this brain area that correlates with other sites within the desired network. This enables brain networks to be targeted by non-invasive brain stimulation, and has the potential to enable remote effects of brain stimulation be utilised to fine tune candidate sites for NIBS. 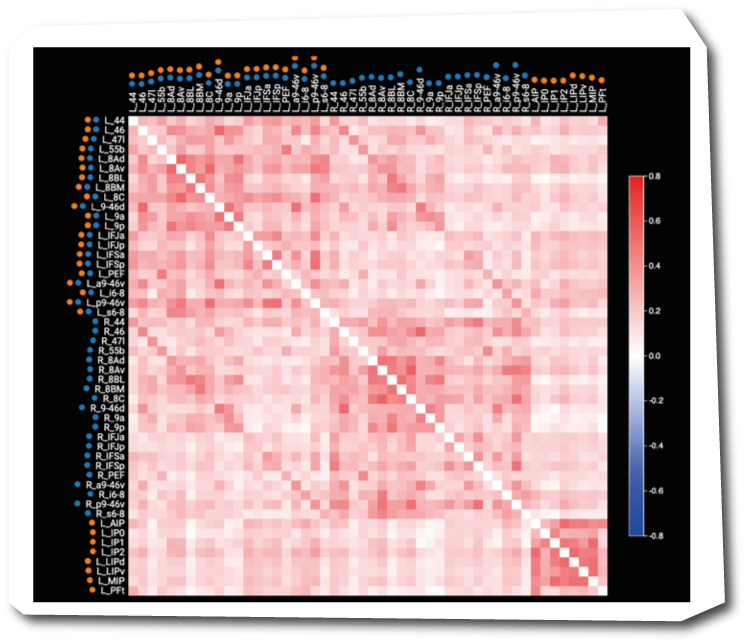