There is an ever-growing body of work which aims to draw attention to the understanding that professional & amateur athletes competing, at all levels, in high-impact sports are more susceptible to long-term brain damage. First coined as the ‘punch drunk syndrome’ in professional boxing, the neurodegenerative pathology, linked to exposure to repetitive, mild traumatic brain injury, or to a single, moderate or severe traumatic brain injury, is now known as Chronic Traumatic Encephalopathy (CTE) Stewart et al (2016), Stewart et al (2019).

In an attempt to address these concerns, sports, where competitors may be subject to concussions (including, but not limited to, association football, American football, rugby, cycling, cricket & boxing), have all implemented a ‘Concussion Protocol’ designed to be adhered to following any incident which has potential to cause head injury. However, these protocols, are not standardised, the governing bodies who implement them do so unevenly and inconsistently around the world, and it is often left to the discretion of a referee, trainer, coach or team doctor to determine whether or not a participant may continue.

Diagnosing concussion is often a difficult affair, given the multiple interacting physiological systems which can be impaired as a result of the injury. An inhibition of either the central nervous system, peripheral nervous system, sensory, neurovascular and musculoskeletal systems could all demonstrate a concussion diagnosis. Whilst a variety of instrumented tools are available for the assessment of any of the aforementioned systems, it is a time-consuming, costly endeavour, resulting in significant challenges for the prediction, diagnosis, treatment and rehabilitation of concussion. (Ralston et al (2020)) Despite worldwide acknowledgement, there remains no ‘gold standard' assessment tool for the diagnosis of a concussion - it remains a clinical decision.

Physiological vibration acceleration (phybrata) sensing is an innovative new approach to precision health monitoring pioneered by the American company, PROTXX. The standard phybrata test developed by PROTXX requires the patient to simply stand still for 20 seconds with their eyes open (Eo) and again for 20 seconds with their eyes closed (Ec). During this static balance testing, the phybrata sensor uses a microelectromechanical system (MEMS)-based inertial motion unit (IMU) to detect microscopic involuntary vibrational motions of the body (linear accelerations in 3 directions). The phybrata signals record both normal motions characteristic of healthy individuals and pathological motions caused by physiological impairments that degrade balance and postural stability. Figure 1 shows sample phybrata times series data and spatial scatter plots, as reported by the PROTXX iOS app, illustrating the visually observable differences between Eo vs. Ec tests, as well as between “healthy” and “impaired” test subjects. In this example, the impairment was caused by a concussion injury. 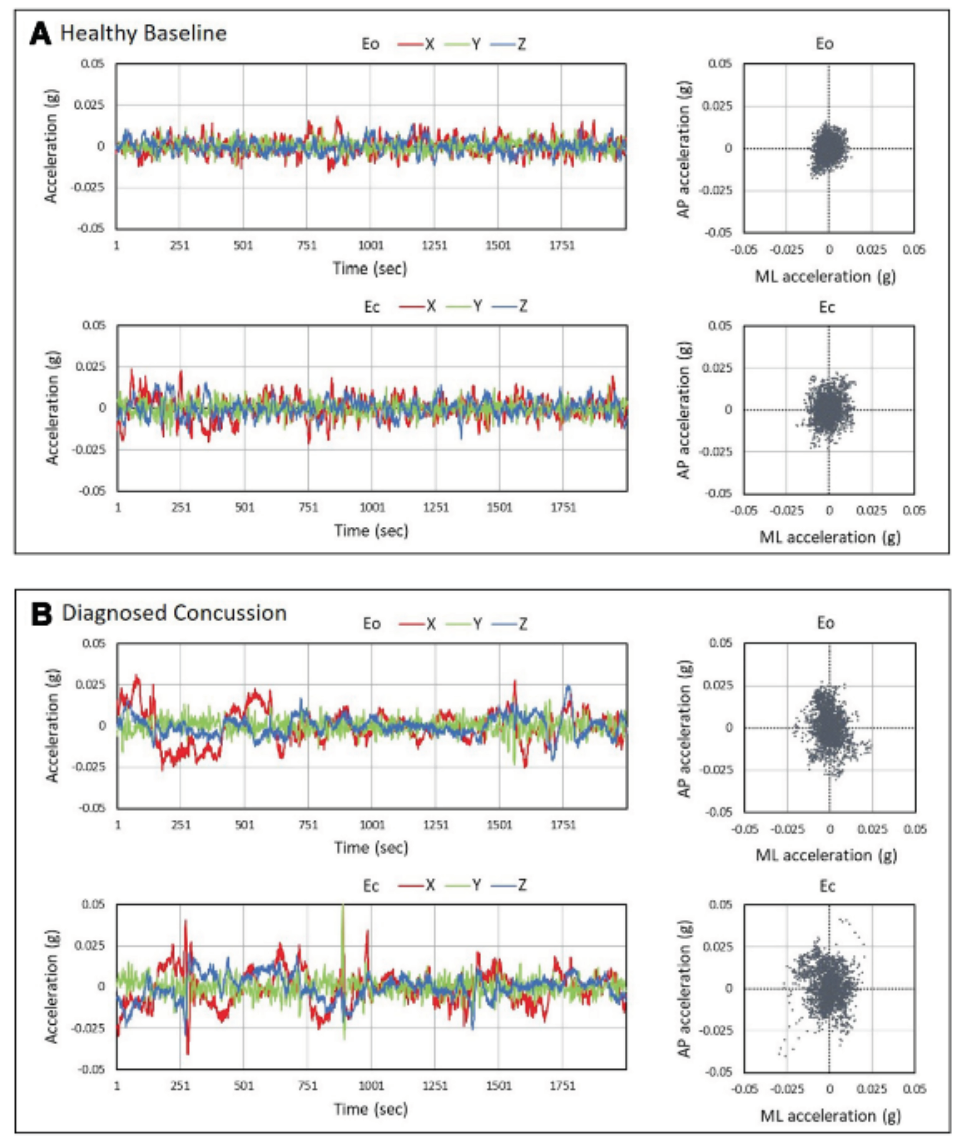 PROTXX combines unique spatial-domain, time-domain and frequency-domain features in the phybrata signals into vibrational signatures (or digital biomarkers) which are used to identify and quantify impairments to specific physiological systems, including the central nervous system (CNS), peripheral nervous systems (PNS), sensory systems (visual, vestibular, somatosensory), and musculoskeletal system, as illustrated in Figure 2 below.

Figure 2. Phybrata signals are used to detect and quantify impairments to different physiological systems in the body based on their unique contributions to biomechanical stabilisation of the head and eyes as the body's reference platform for balance and movement.

For “impaired” individuals, additional phybrata biomarkers have been developed by PROTXX which allow impairments to the CNS, PNS, sensory (vestibular, visual, somatosensory), and musculoskeletal systems to be identified and quantified: For the specific case of concussions, the ROC curves in Ralston et al (2020) indicate that the average power (Eo+Ec)/2 may be utilised to support a clinical diagnosis of concussion, while Eo and Ec/Eo may be utilised as independent measures to confirm accompanying neurological and vestibular impairments, respectively. All 3 measures demonstrate area under the curve (AUC), sensitivity, and specificity above 90% for their respective diagnoses. Note that the “cutoff” values for each metric generated by the receiver operating characteristic (ROC) analysis in the above reference and summarised in Table 4 (reproduced below) are the 95% confidence level threshold values for each metric to classify the presence of the corresponding impairment Ralston et al (2019).

Figure 5 (below) shows sample Eo and Ec phybrata power histograms and Anterior-Posterior/Medial Lateral acceleration spatial scatter plots for 15 athletes (ages 17–23): 5 healthy athletes during baseline testing (Figure 5A); 5 following a concussion with only vestibular impairments observed during physical examination (Figure 5B); and 5 following a concussion with other neurological impairments observed during physical examination (Figure 5C). Patients with a vestibular impairment only consistently showed Eo phybrata powers that remained below the 95% confidence interval (CI) for healthy subjects, but Ec phybrata powers elevated above the 95% CI for healthy subjects (Figure 5B). Patients diagnosed with neurological impairment, on the other hand, typically showed both Eo and Ec phybrata powers significantly elevated above the respective 95% CIs for healthy subjects (Figure 5C). 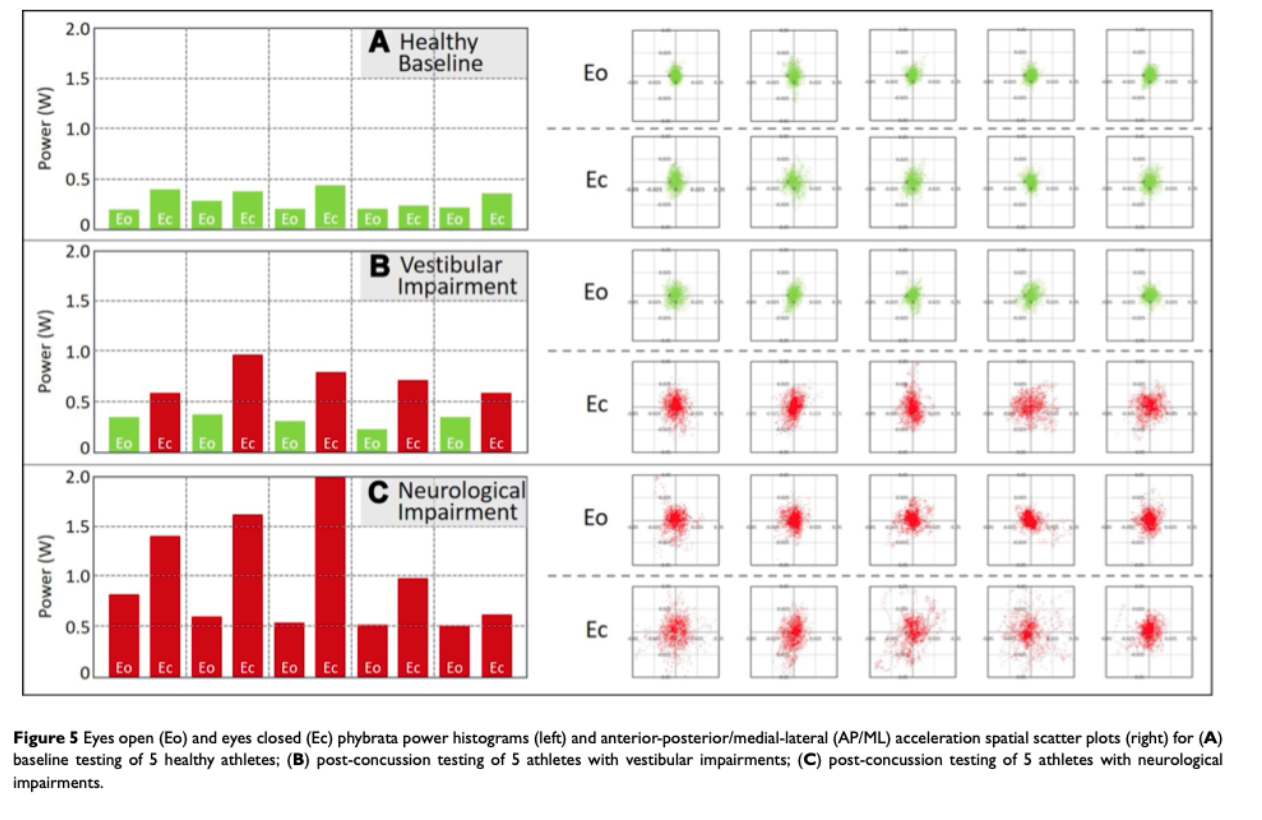 Immediately following each Phybrata Eo-Ec test, the Protxx-Clinic mobile app presents the patient’s phybrata performance along with the normative ranges expected for healthy individuals of the same age, allowing classification of the patient’s performance as “healthy” vs. “impaired”. Biomarkers for specific impairments of interest are also plotted together the 95% confidence intervals used to quantify the degree of impairment. The patient’s test results can also be compared to previous phybrata tests, and changes in the patient’s phybrata biomarkers as a function of time can be used to quantify and track the response of specific physiological impairments to medications, treatment, or rehabilitation. Having completed two stationary 20 second tests (1x eyes open, 1x eyes closed), the collected data is streamed to the cloud for signal processing, data analysis and report generation. Results of phybrata testing are made available in a number of clear, intuitive graphs (Figure 6). The first and second screens display visit notes and a patient identifier, with a summary of the results. The third screen of the report plots the patient’s Eo and Ec phybrata power, aligned to their age, on a graph of the average Eo and Ec powers of healthy individuals across a range of ages. This chart allows the subject and operator to see how the results from the current test relate to the average values for healthy people the same age. 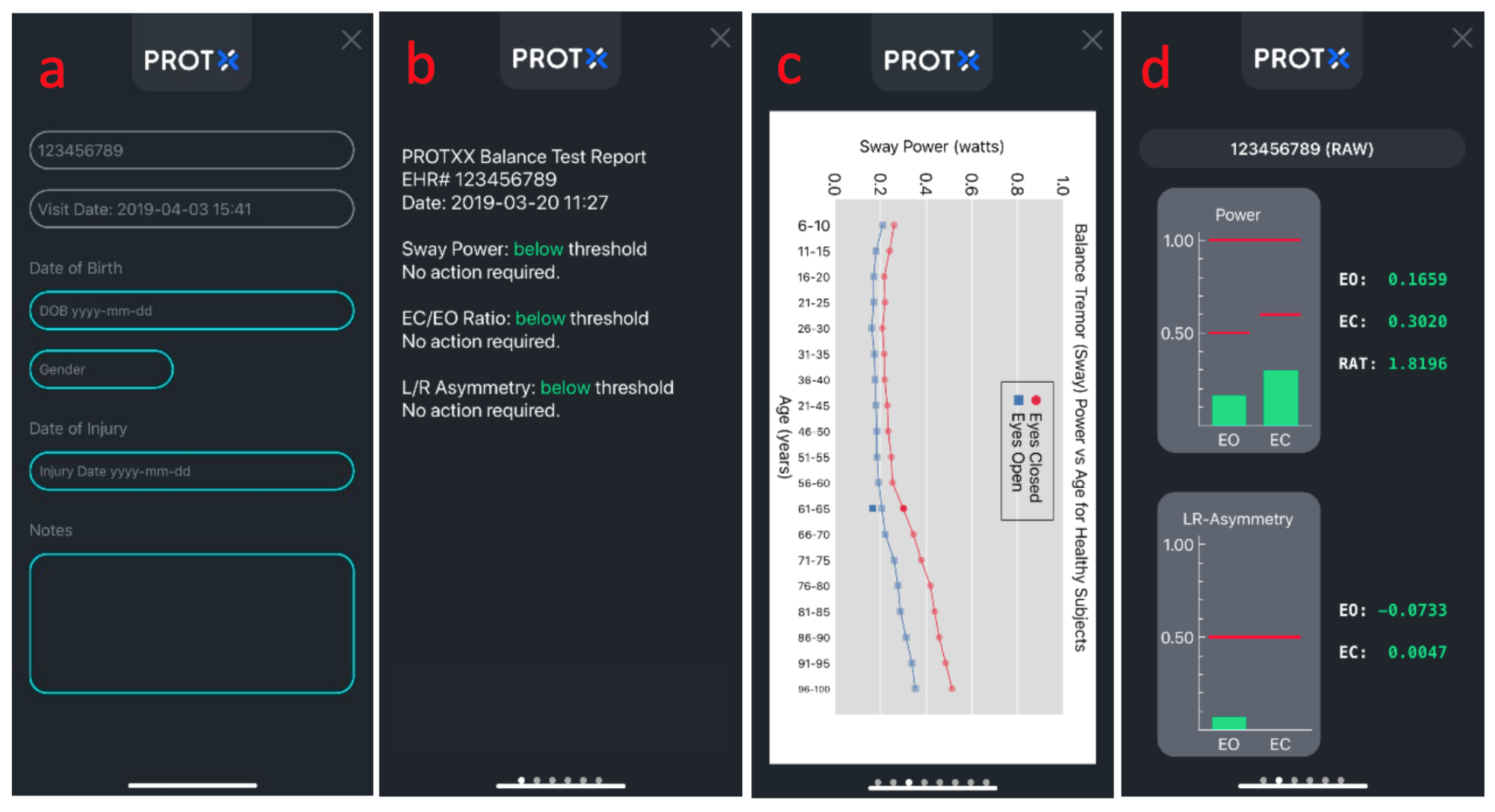 The Acceleration Scatterplot screen (Figure 7) displays spatial scatter plots that illustrate the patient’s movement during both the Eo and Ec tests. The scatter plots are presented from a top-down viewpoint, with axis labels for Forward-Backward and Left-Right movement. The dots represent accelerations of the head at each point in time during the test, measured in G’s. Typically a good phybrata test will have tight, symmetrical scatter plots with all the accelerations densely focused around the centre point. Ec phybrata plots typically show observably greater scatter than Eo phybrata plots. 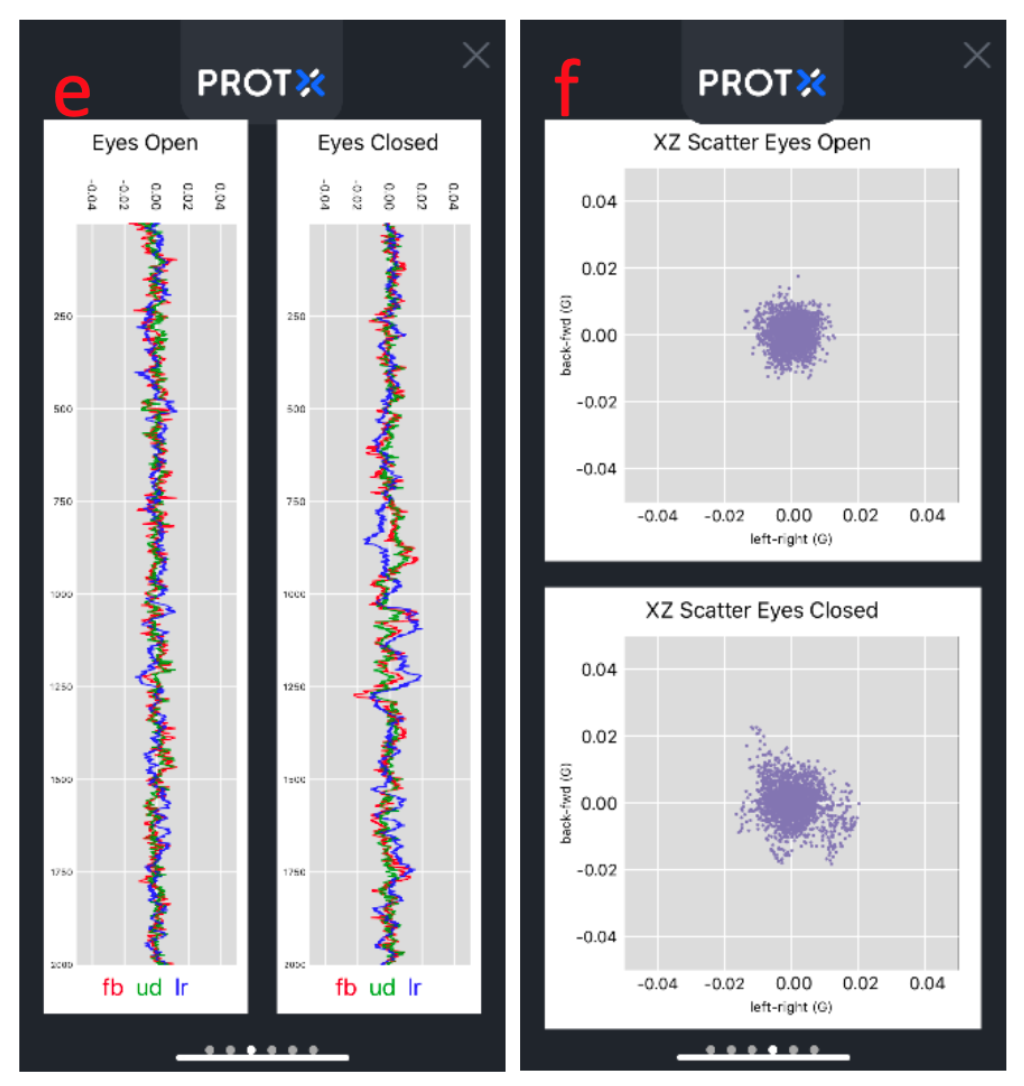