Recently, Brainbox had the chance to catch up with researchers in the Department of Kinesiology in the Mary Frances Early College of Education at the University of Georgia (UGA), Dr. Deborah Barany and Dr. Jing Xu, to gain some insights into the fascinating research being carried out at the Neurostimulation Laboratory, which they co-direct.

Both researchers are interested in exploring the basic principles of human motor control and skill learning, as well as how transcranial magnetic stimulation (TMS) can be used as a tool to better understand the neural mechanisms underlying these principles, and the neural substrates for motor impairment and biomarkers for rehabilitation after neurological injuries.

“My current TMS projects,” Deborah, also director of the UGA Brain and Action Lab, tells us, “focus on how we integrate visual and motor information captured with our Kinarm End-Point Lab to decide when and where to move. We are specifically making use of the DuoMAG MP-Dual to investigate the time course of corticospinal excitability and inhibition while preparing to intercept moving objects.”

Jing, who also directs the UGA Cognition and Dexterity (CoDex) Laboratory, adds, “There are two themes of ongoing projects in my lab that use TMS as a tool to investigate neural substrates in motor control and rehabilitation. In one line of research, we are interested in examining the functional involvement of neural descending pathways in different components of hand dexterity. The second line of research involves using TMS to examine the motor pathway excitability and inhibition during movement planning and action selection.” 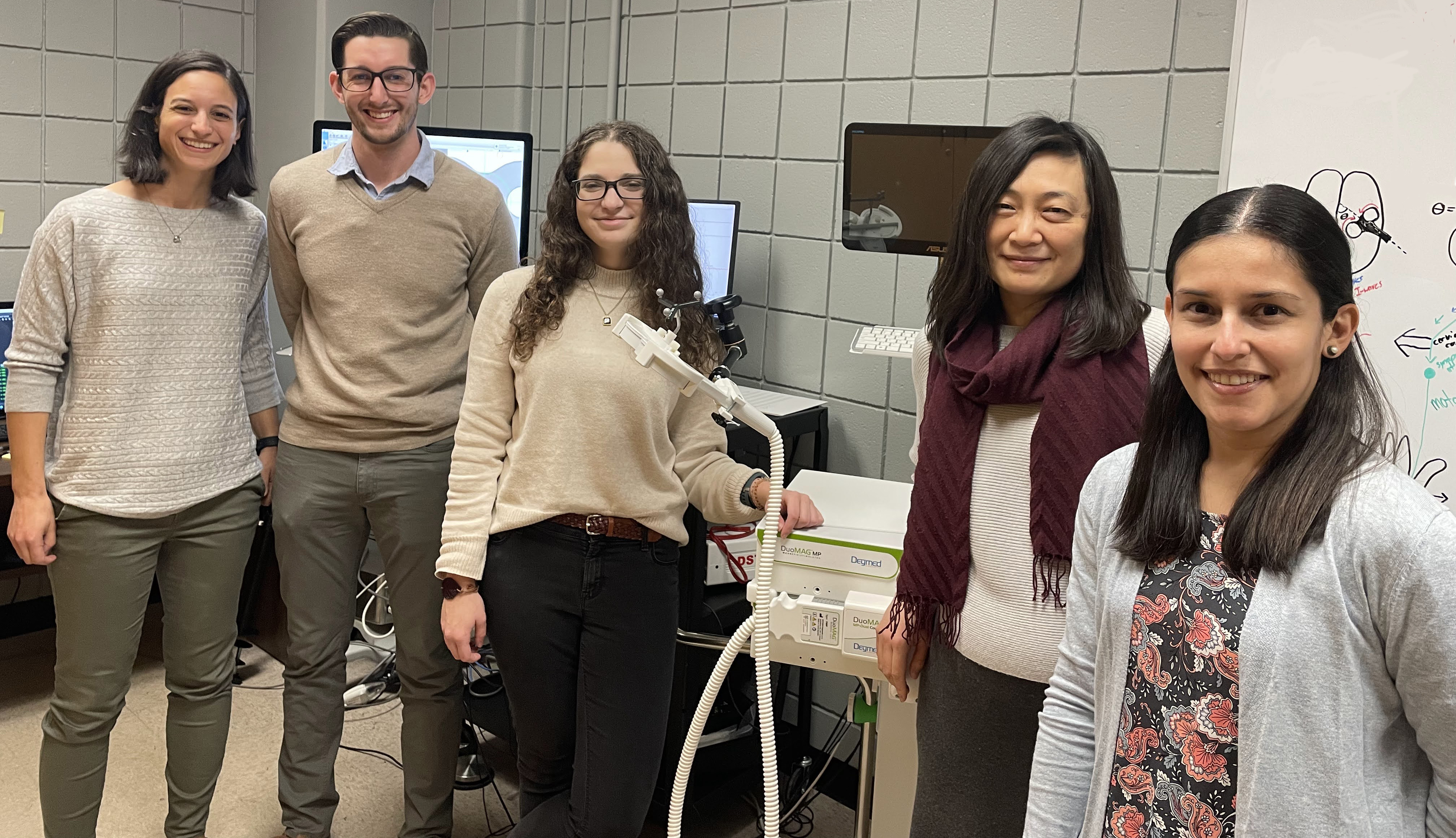 Besides these ongoing projects, the acquisition of the new systems at UGA will allow the team in the Neurostimulation Laboratory to collaborate with other neuroscience and movement researchers across the campus. A collaboration with Dr. Rob Lynall, another researcher in the Department of Kinesiology, is underway as they seek to tease apart cortical contributions to conflict monitoring during various types of dynamic movement preparation.

While discussing the team’s ongoing research, Deborah notes that some of her ongoing projects have been inspired by the work produced by academics such as Dr. Marco Davare (KU Leuven / Brunel University), through his work on virtual lesions and ventral-dorsal stream interactions during reaching and grasping, and Dr. Mike Vesia (University of Michigan)’s work on investigating interactions between motor cortical areas during goal-oriented action.

“One of my first introductions to TMS was shortly after joining Dr. Scott Grafton’s lab as a Ph.D. student at the University of California, Santa Barbara, and reading his seminal paper with Dr. Michel Desmurget on the role of posterior parietal cortex in online movement correction. I was fascinated with the idea that such a temporally and spatially specific change to one’s brain state could have a clear disruption of movement behavior, and I have been hooked ever since,” says Deborah.

“I first learned TMS,” Jing expands, “in Professor. Rich Ivry’s Cognition and Action (Cognac) Laboratory at the University of California, Berkeley during my Ph.D. years. Rich is a constant inspiration in many aspects of my scientific career. Particularly related to TMS, Rich’s influence made me never afraid of picking up a new technique. During my years at UC Berkeley, Dr Julie Duque (now at Université Catholique de Lovain) and Dr Tim Verstynen (now at Carnegie Mellon University) also patiently taught me TMS techniques from the very basics. I can’t be more grateful to those two great mentors. During my post-doc years at Johns Hopkins University, I worked on a longitudinal stroke recovery project using TMS with Dr Pablo Celnik. From Pablo, I learned rehabilitation-related topics, especially interhemispheric inhibition and its applications in stroke recovery. Currently I’m also learning various complex stimulation methods and real-time integration of TMS and EEG from Dr Michael Borich at Emory University.”

Of course, both Jing and Deborah also mention their admiration for Professor John Rothwell (University College London) and the members of his laboratory who have been responsible for both laying the foundations for transcranial magnetic stimulation research, as well as routinely pushing the field forward with new publications.

Both Deborah and Jing started their new positions (and their new laboratories) at the University of Georgia in the midst of the COVID-19 pandemic. As a result, much of their time, they tell us, was spent shifting their research priorities to adapt to the new and ever-changing limitations to subject recruitment and patient-based work — especially in the early days of the pandemic. These limitations also led to a small silver lining, however, as the team was able to spend more of their time focusing on pilot work and improving their protocols for when their next research project can start properly.

The team at Brainbox was extremely pleased to provide Deborah and Jing with our very first fully online product installation since the beginning of the pandemic, back in September 2020. “We are incredibly grateful to Mark Crawley and Rory Cutler,” they tell us, “for guiding us through the virtual installation and training of all the different systems and for their patience as we fumbled through finding the different pieces of equipment.”

As new investigators, Deborah and Jing are eager to get their various basic and clinical research projects off the ground as soon as possible, test their new protocols and collect pilot data, and support student learning of non-invasive brain stimulation methods. In the future, too, the team hopes to complement their TMS research with the introduction of some new transcranial electrical stimulation techniques to augment motor learning with the goal of potentially improving rehabilitation strategies, as well as eventually using EEG techniques to explore state-dependent TMS effects.

We are very much looking forward to finding out more about the exciting research being carried out at the University of Georgia, and wish Deborah and Jing all the very best for their next projects.