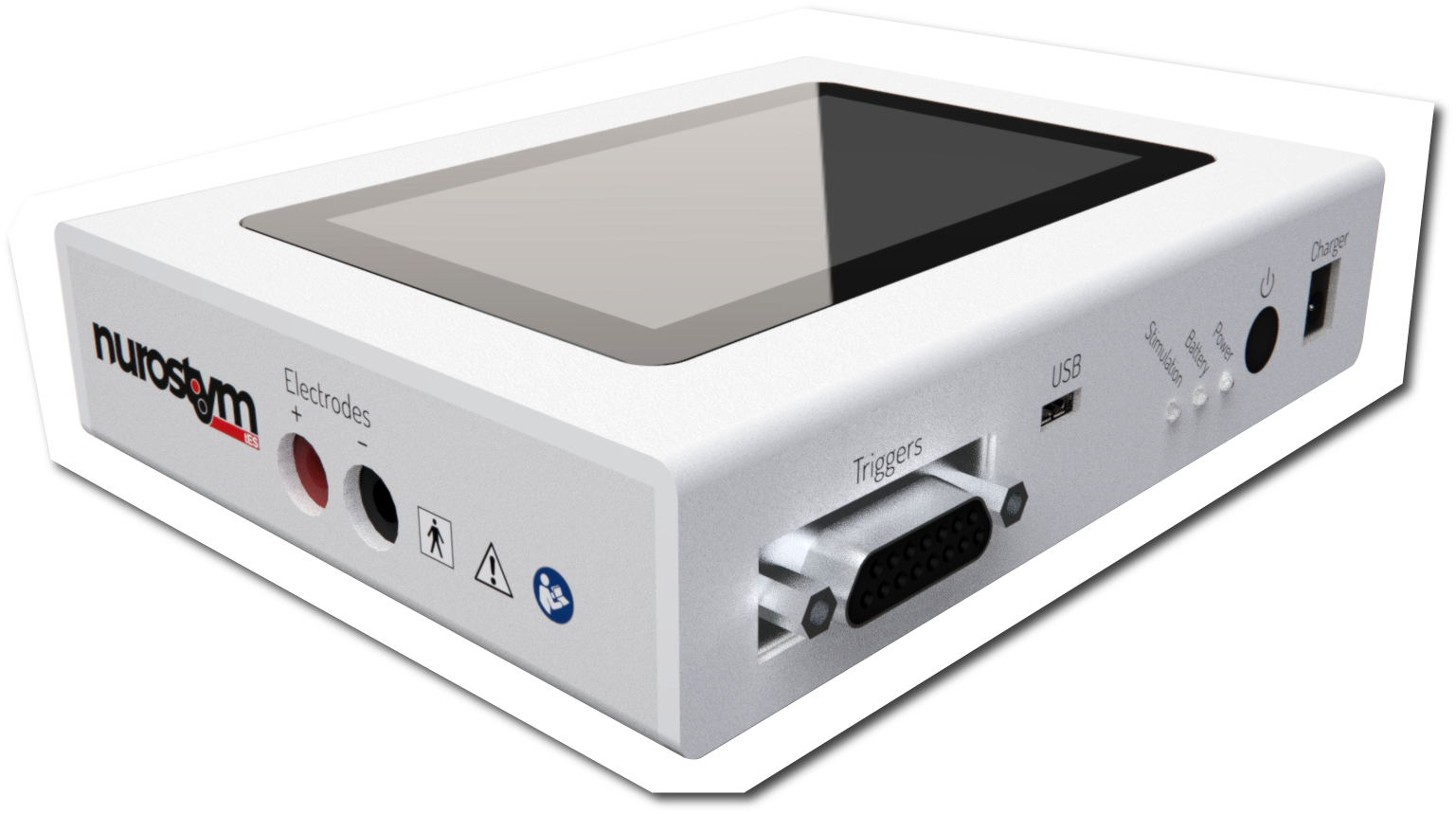 What is the nurostym tES?

Featuring an intuitive and responsive touchscreen display, the nurostym tES provides researchers with ultimate clarity and ease of use in allowing the user easy customisation of all stimulation protocols directly from the device itself. The nurostym system also integrates seamlessly with its proprietary computer application- a Windows program that allows the user to generate and save up to eight custom stimulation paradigms; remotely control the nurostym device through trigger-in and trigger-out connections; as well as providing access to stimulation logs and performing system software and firmware updates.

The nurostym device is capable of running a range of transcranial electrical stimulation paradigms, including:

Nurostym includes state-of-the-art safety monitoring features as standard to ensure the wellbeing of both operator and subject. A multi-staged programmable impedance alarm and automatic 'Safe-stop' cutoff system are included as default both to provide the operator with a clear notification of increased impedance and to minimise discomfort to the subject. The nurostym hardware itself is limited to a maximum of 50kOhm to ensure safe operation at all times.

When setting up stimulation paradigms, the tES system offers the user the option to input the size of the electrodes being used for stimulation. The nurostym can then automatically perform a current density calculation and advise the researcher if the current due to be delivered may cause an uncomfortable sensation or adverse effects for the participant. For research use, the option to ignore electrode size is available.

The nurostym tES system comes complete with two accessories to increase its functionality: the nurostym INTERFACE (IO Box) and the nurostym SPLITTER. 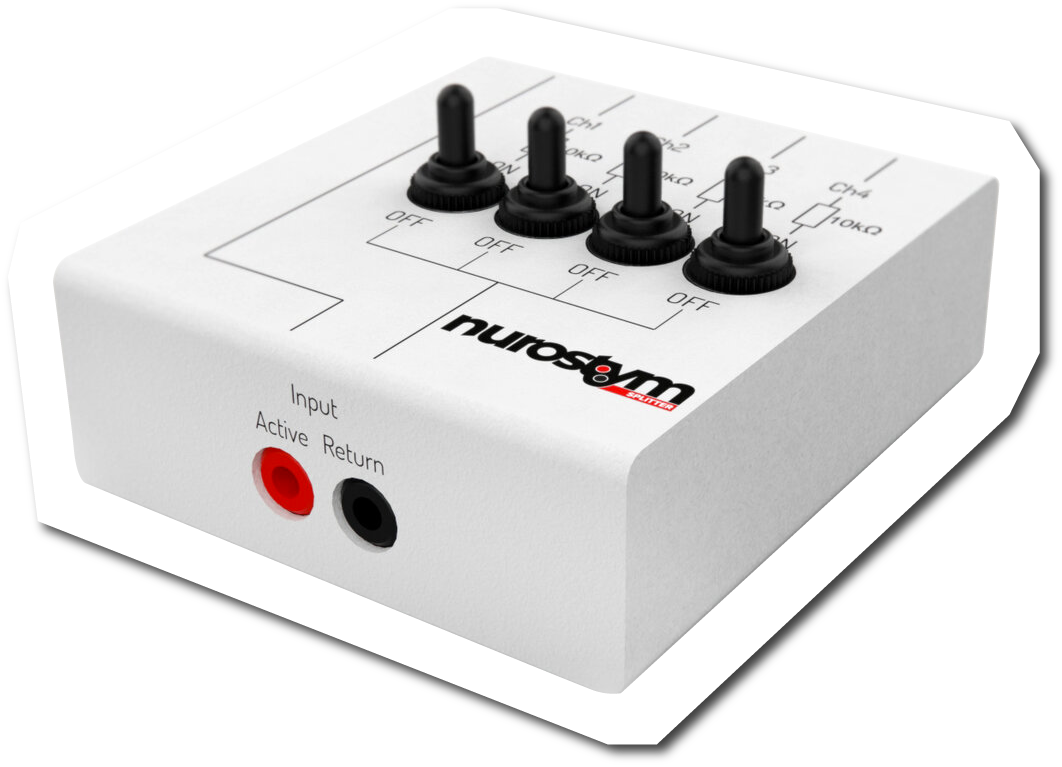 The nurostym SPLITTER accessory allows the user or researcher to make use of up to four return channels of stimulation through a single active channel. While users of typical transcranial electrical stimulation (tES) devices would assume even distributions of current across four channels, the nurostym's inclusion of a dedicated switch for each channel means that users can accurately measure impedance levels for each channel separately.

In addition to these features, the nurostym also offers double-blinding (study mode) and sham control through the use of a five-digit numerical code to ensure that only the study manager is able to change the stimulation parameters.

Additional triggering modes (Easy mode and Complex Triggering) are also available. By entering a device-specific PIN code, the nurostym can be loaded into 'Easy Mode', restricting the device to operate only in specific, predefined conditions. Using this, and under the strict guidance of a medical professional, the device may be configured into Easy Mode to allow for the operation of the nurostym in a home environment.

For more complex triggering options, the device's two trigger-in channels may be configured to start, stop, or both on the rising and falling edges of a pulse. Trigger-Out options are more numerous & complex. As well as being able to trigger on the High & Low levels of stimulation, the nurostym can send triggers out every time the polarity changes, any time the maximum and/or minimum peak of a sinusoidal wave is reached or when a notified number of cycles has been performed (during transcranial alternating current stimulation (tACS)).

The nurostym tES has been CE-marked for use as a medical device for the treatment of mental and neurological disorders.

Watch an unboxing of the nurostym tES system: 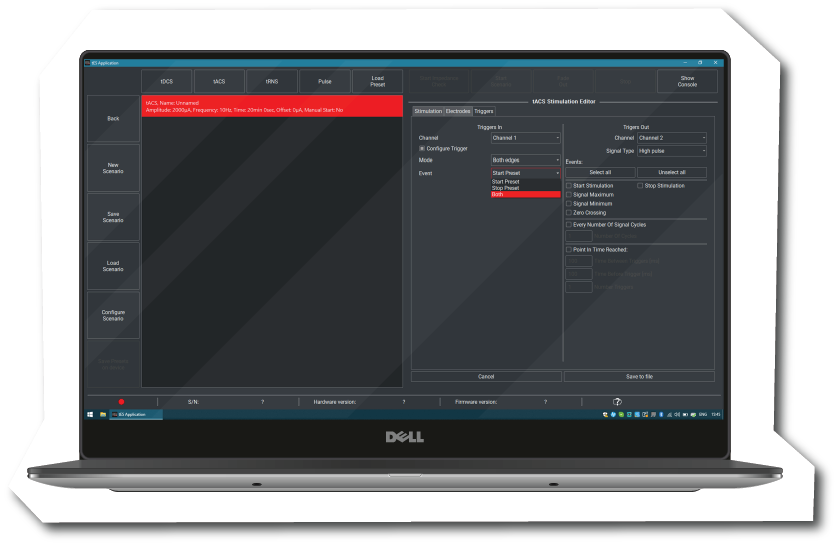 All aspects of stimulation can be configured and controlled from the proprietary Windows computer application. Custom stimulation paradigms can saved to one of the preset windows available on the device or delivered via the stimulator as normal. The nurostym app serves as the portal to download stimulation logs and perform software/firmware updates when available.

With 7 BNC connections for triggering and arbitrary waveform control, a 15pin D-Type connector and three touchproof connections, the added functionality generated by the new INTERFACE module makes the nurostym truly unrivalled in flexible stimulation options. Multi channel stimulation montages can also be accomplished via the SPLITTER module, allowing the user to enable up to four channels of stimulation with a single active channel. Available as standard with the nurostym.

Save or load up to eight presets onto the device for quick set up times. These presets can either be protocols which are most used, or in a study which is double blind controlled. Parameters can be hidden via the ‘Study Mode’ option, so a user is not aware of either the type of stimulation being delivered, or whether or not stimulation is active or sham.

MRI-compatible solutions are available as an additional option for the nurostym tES system. The options available are suitable for all types of scanners, including 1.5T, 3T and 7T MRI. Speak to one of our product specialists about adding MRI-compatibility to your nurostym tES.

Configured in the nurostym computer application, the stimulator has five different trigger channels. Two Trigger-In channels and three Trigger-Out options offer a multitude of simple or sophisticated options. Start, stop, number of cyles, peak/trough and polarity change triggers can all be specified.

Global nurostym users The nurostym tES device is in use in these institutions worldwide.

Visit our shop to purchase accessories, consumables, and starter kits for this system