Interactive robotics systems can be used by neuroscience researchers to assess a subject's ability to perform a range of behavioural tasks designed specifically to probe cognitive, motor, and/or sensory functions. Commonly, these behaviour tasks require a subject to grasp an end-effector robot (such as the Kinarm End-Point Lab) or to couple their upper limb with an exoskeleton robot (such as the Kinarm Exoskeleton Lab) while moving in a two-dimensional virtual reality environment.

These 'Interactive Robotics' techniques can provide researchers and clinicians with an objective, sensitive approach to quantifying the patient or subject's cognitive, motor, and sensory functions through the precise measurement of human behaviour.

Approaches such as this using interactive robotics systems can allow the discrimination of extremely subtle (but statistically significant) impairments or changes in performance, providing an essential indicator to clinical researchers developing targeted therapies for brain injury and/or diseases (Simmatis et al, 2017).

What can Interactive Robotics Systems offer?

Interactive robotics address one of the most urgent issues in the management of brain injuries and diseases: the lack of objective assessment to identify, measure and track cognitive, motor or sensory impairments resulting from injury or disease. For instance, to assess visuomotor coordination, a common test that a clinician may use to rate the patient’s ability to touch their finger to their nose has only a three-point scale – a necessarily coarse ordinal score to ensure repeatability. Unfortunately, such coarseness makes it difficult to identify subtle changes in sensorimotor function and leads to floor and ceiling effects in the scoring system. These methods based on visual/physical inspection lag behind the level of precision and consistency that modern clinical scientists need, representing a significant barrier to the development of new therapeutic interventions, such as neurostimulation therapies.

Foundations from basic research on sensorimotor control and learning

Over the last 40 years, our understanding of how the brain supports cognitive, sensory and motor function has substantially increased due to the availability of advanced technologies, such as robotics (Mussa-Ivaldi et al., 1985; Shadmehr and Mussa-Ivaldi, 1994). With interactive robotics, neuroscientists have been able to study:

1) How the motor system can rapidly respond to physical or visual disturbances to generate goal-directed motor corrections (Scott, 2016).

2) How the sensorimotor system adapts to visual and mechanical disturbances provides a foundation for understanding motor learning (Wolpert et al., 2011).

3) How sensorimotor control and learning are supported by a highly distributed brain (Kandel et al., 2021).

Given the impact of interactive robots to study brain function, it’s logical to believe that these technologies also have great potential to quantify brain dysfunction. Robots to quantify motor impairments were first used to support studies exploring the use of robots for rehabilitation following stroke (see review by van Delden et al, 2012, Shirota et al, 2016).  These early studies focused on basic motor skills such as reaching and tracking (Bosecker et al, 2009).  However, interactive robotic platforms with integrated virtual reality systems have the potential to examine a broad range of brain functions beyond basic motor skills such as proprioceptive and cognitive functions (Scott and Dukelow, 2011). The result has been the development of Kinarm Standard Tests (KST), the first standardized and automated approach to quantify cognitive, motor and sensory processes.

During an assessment, the subject either grips an end-point robot or lays their arms in an exoskeleton robot.  They are given simple instructions for the behaviour to be performed, and then perform the task - such as directing a hand to a target, interacting with objects in the environment or coordinating the movement between both arms to perform a bimanual task.  While the subject completes the task, the robot may actively move the subject’s hand/arms and record their arm movement.

After the 2 to 4-minute task is completed, a detailed report of the subject’s performance is provided, comparing their behaviour to healthy performance considering the influence of age, sex and handedness.

Interactive robotics, such as Kinarm assessments, allow clinician-scientists to detect, quantify and track meaningful changes to the cognitive, motor and sensory functions of a range of neurological injuries/diseases.  They have been used by clinical researchers around the world in >24 indications (e.g. stroke, TIA, TBI, concussion, ALS, Alzheimer’s, MS, Parkinson’s, kidney disease).  Examples of clinical applications can be found here: https://kinarm.com/clinical-applications/ 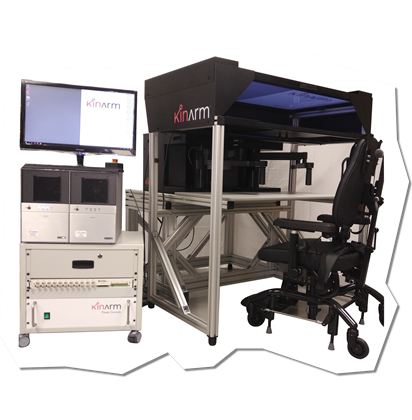 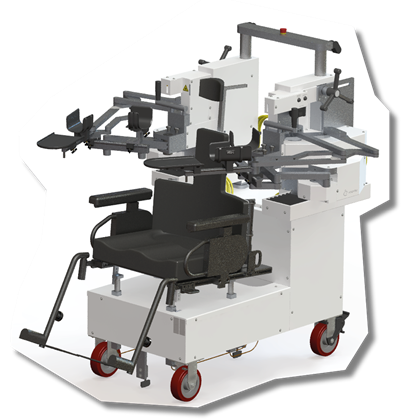